In the end, the decision was made for me.

For weeks I had been wondering whether, when, how to wrap up the famous Wallingford Green-Gym blog.  The flow of material had been slowing down like a Chilterns chalk stream where too much water has been abstracted from the aquifer.  Today @ Green Gym?  That the day dawned exquisitely promising in South Oxfordshire, and matured into a perfect English summer’s day, is all I know!

So it only remains for me to thank all the colleagues who have contributed over the years – and you, the readers of this blog.  To close: a sequence of photographs on the subject of ‘Demolition’ – and, of course, one last music link.

When clearing watercress channels, the only wet should be: the stream in which volunteers are wading; the moisture content of the vegetation being removed; and the sweat patches on our T-shirts (waterlogged plant-life ain’t ’alf ’eavy).

The weather could have been more unmannerly.  At dawn, the situation could most politely be described as “steady downpour” with a 90% chance of “heavy rain” mid-morning.   Precipitation, however, put itself on hold for session-start and end, and managed to keep itself tolerably in check in between.  (Was that the odd rumble of thunder we heard in the distance?)  And ducks are famously fond of the rain anyway: 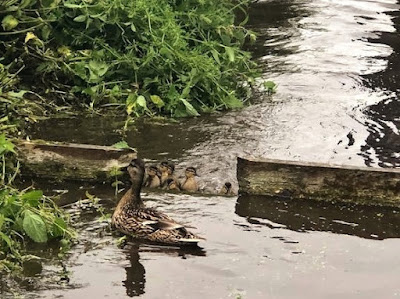 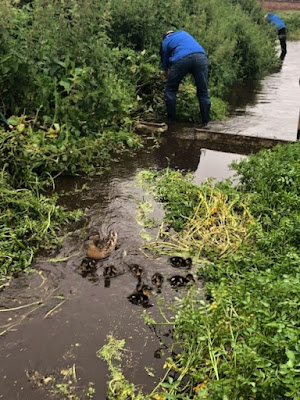 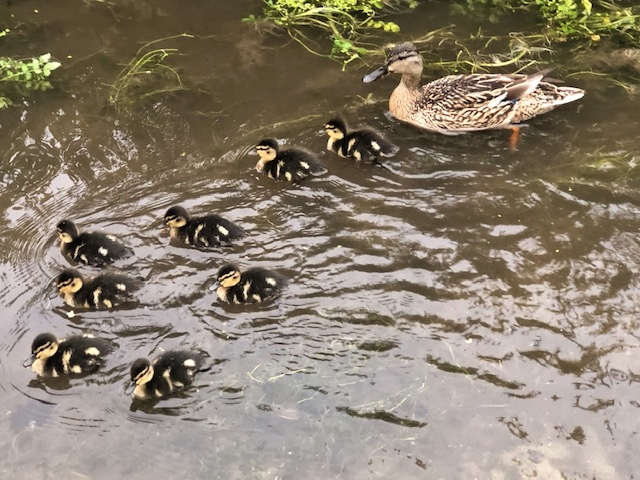 The camera was not so enamoured of the atmospheric conditions when the moisture level rose: 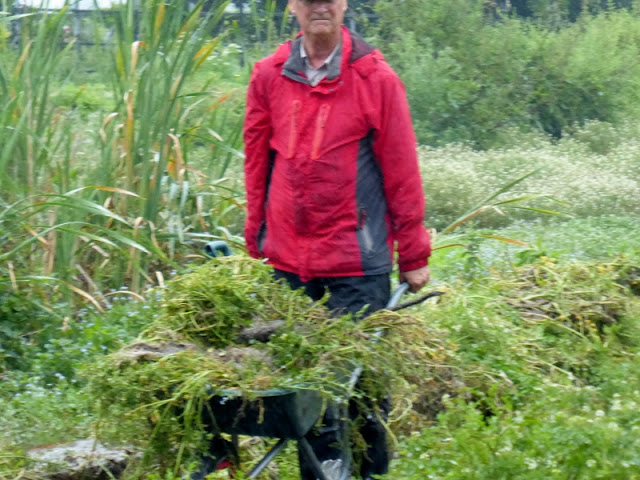 The taskforce split into two, to work respectively up- and downstream from the road bridge.  Upstream, an enthusiastic group of volunteers from another organization had already shifted piles of cress on to all along the bank.  Welcome to our newest volunteer! who was getting stuck in straight away under the eye of one of the old and bold. 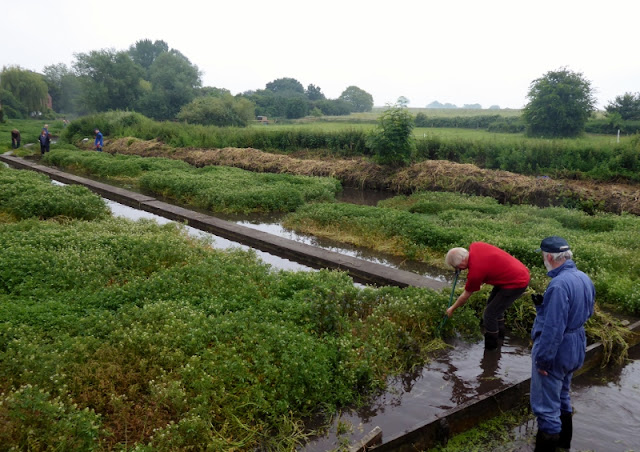 Downstream, Green-Gymmers were more spread out, and a tad more demonstrative about taking pride in their work.  One paused for a photo-call:

Upstream, cress was piled straight onto the bank.  Downstream, a team effort was required to barrow it across the beds, and transfer it to our waiting expat … 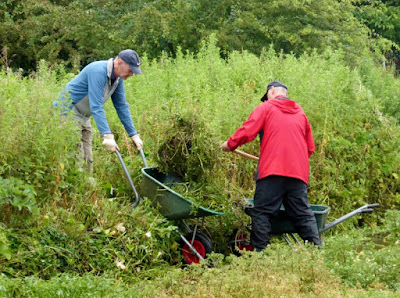 who in due course carted it away to the compost heap: 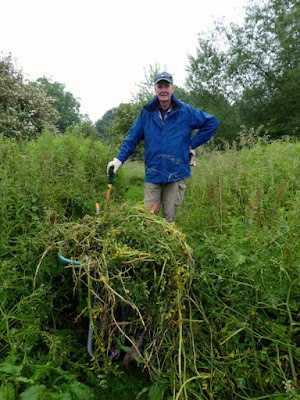 Further downstream yet, another volunteer was able to use the muck rack to drag floating cutting on to the bank – an admirable demonstration of technique and ingenuity: 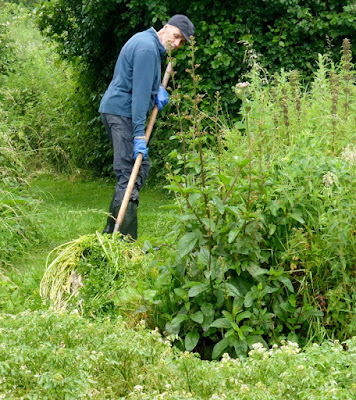 The exertion plus humid weather worked up quite a thirst and appetite for cake – and conversation: 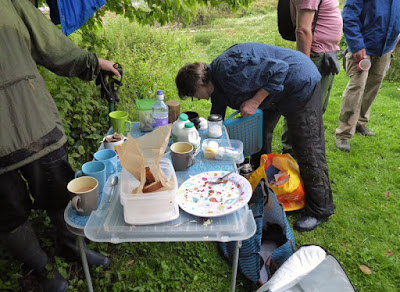 Up the hill, down the hill

What more idyllic spot could there be than an English chalk-grassland meadow in June?  Actually, that rather depends on two factors:

The task was: ‘upgrade fence enclosing sheep pasture, Pt 1’, ie remove old fence.  Happily, the sheep were busy grazing on the far side of the site – indeed on the other side of the motorway – so we could demolish the old fence with impunity.  (‘We’  = WGG + community-volunteering team from the Environment Agency.)  Other parties of volunteers will come along IDC to hammer more posts in the ground and erect the new fence.

Removing staples from posts was job enough, but removing the posts themselves ... 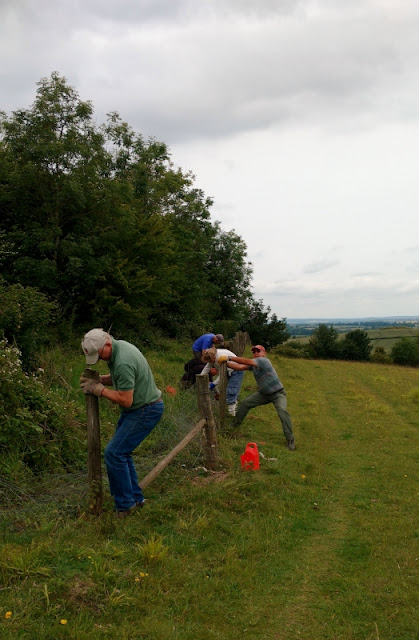 The fencing itself, of course, had to be peeled off the posts; and redundant wire and posts carried down to the landie to be taken away: 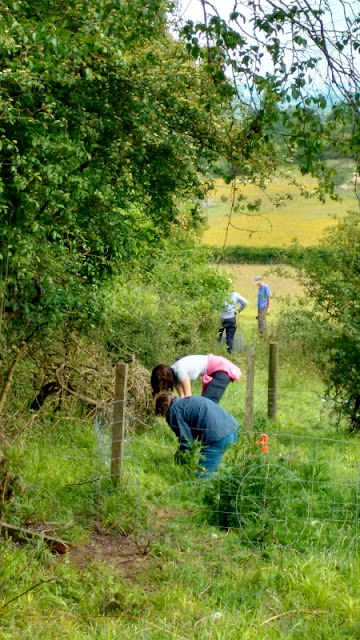 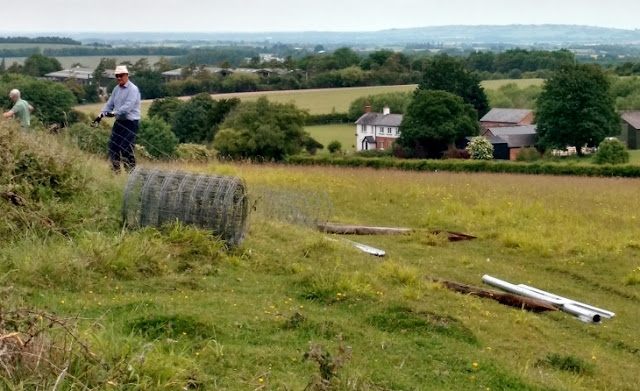 Inevitably tool wanted was at bottom of hill, so we were well carting old material down and the new up.  One roll of fencing (“Just roll it to the truck, it’s easier than carrying”) took a bid for freedom (Oh no! D-d-d-d-dive!) and a Green-Gymmer was seen chasing it down the hill, only to schlepp it back up to the landie.

Thanks to the help from our friends from the EA, it was a very productive morning.  With 19 of us working away, we had most of the old fence and posts out before the half-time break.  Tea time featured a feast – and discussion of knee support? 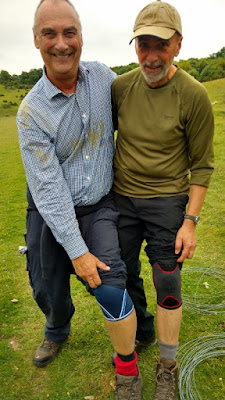 Afterwards, back to work.  Uphill. 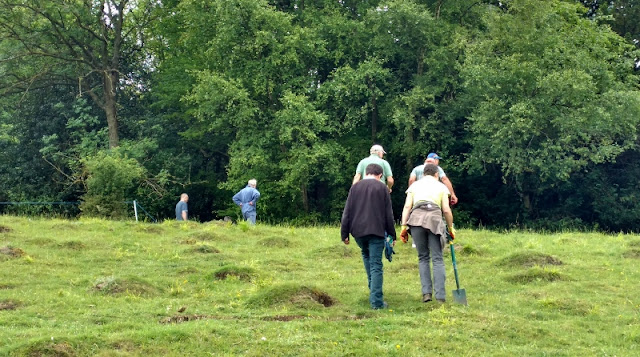 The priority now was to dig holes for the two new strainers and get them in.  Even with half a dozen workers in attendance on each post, this was no mean feat.  They sunk one, and got the second well on the way.  [Session Leader says, “Well done teams” – Ed.] 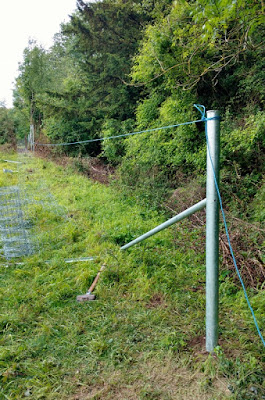 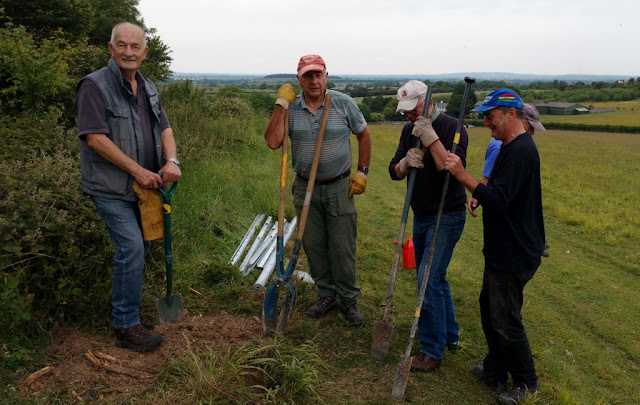 The rest of the party tackled some rabbit fencing, cutting it away at ground level on hands and knees, so as not to rip up the precious turf.  While others trimmed the hedgerow - a thorny mass/mess of rose, brambles, hawthorn - to give line of sight between posts one and two. 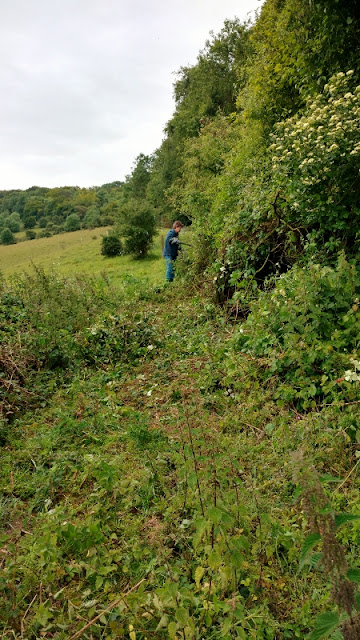 So now it’s over to the next crew.  It has all been nicely set up for them – though they may still get that Grand Old Duke of York feeling: it comes with the territory.